Josep Rull asks the court: Is this trial about ideas or about facts?"
The former Minister of Territorial Planning and Sustainability deems that "there is a scenario of denial of politics, of denial of dialogue" 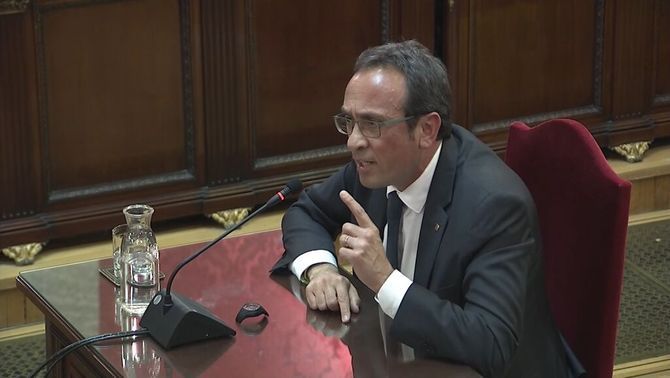 Josep Rull, the former Minister of Territorial Planning and Sustainability, opened his statement by thanking his defence counsels for their work and, in Catalan, by mentioning and thanking his family, "which has suffered and respected my political commitment."

Rull wondered if "this is a trial about ideas or about facts". "What is the reaction of a state with the rule of law - he added - before the democratic challenge Catalonia poses to Spain?"

According to Rull,  "there is a scenario in which politics are denied, dialogue is denied." And with regard to the reaction of a state with the rule of law, he said that "I fear there is a certain tendency to except the system of rights and liberties from it."

The former Minister said "I have faced the music and responded with a clear conscience. I am accused with a manipulated interview that is unworthy of a serious State Attorney General." He also pointed out that 16 years are being asked for him and that "I assume I am being charged with rebellion because I have not renounced my political activity."

He also criticised a television interview to the former minister of Justice, Rafael Catalá who, according to Rull, laid out the terms and deadlines for their suspension as members of parliament and of how the investigation would be carried out.

The statement closed with renewed references to his family and, specifically, to his children: "They have decided that I cannot see my ten and four year old children grow up. But I have the dignity to defend noble ideas." "Regardless of the sentence they may issue -he added- they will not prevent me from leaving them something extremely valuable: the dignity of having defended legitimate ideas and noble ideas." He closed with his commitment to allow "my children to live in a better country, in a Catalan republic in which nobody will be jailed for defending his ideas."

Romeva: "Today it is us, but tomorrow it could be anyone"

Junqueras: "It would be best for all if the question was returned to politics"