Junqueras: "It would be best for all if the question was returned to politics"
The president of ERC devoted his closing statements in the Catalan independence trial to moving the conflict between Spain and Catalonia out of the court and to ask for "dialogue, negotiation and agreements" 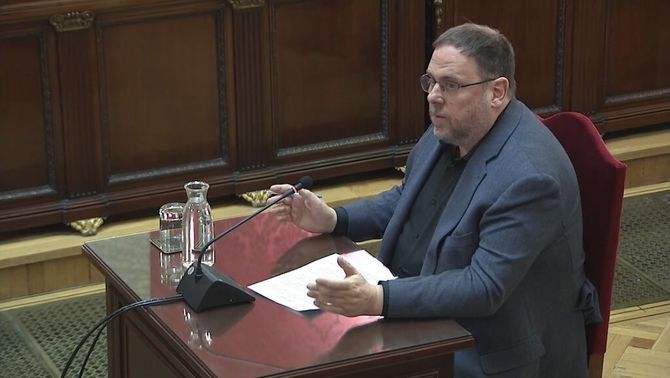 The closing statement of Oriol Junqueras in the Catalan independence trial was a call for dialogue, agreement and to return the conflict between Spain and Catalonia to politics. He was the first of the accused to speak at nearly half past four in the afternoon, in the last sitting of the trial in the Supreme Court.

The president of ERC, who spoke for about three minutes out of the fifteen available to him, stated that the question that was brought to the dock should never have left politics:

"I have always avoided bad politics that deny dialogue, negotiation and agreement and which, as I understand it, has given you the responsibility of issuing a ruling. I honestly believe it would be best for all of us, for Catalonia, for Spain and for Europe, to return the question to the domain of politics, of good politics, from which it should never have left. To the field of dialogue, negotiation and agreement."

Junqueras defended his career as a man of piece and his "commitment towards good":

"The will to dialogue, negotiate and reach agreements from respect to human rights and fundamental freedoms should never be a crime. All of my books, articles, speeches, actions, demonstrate my undeniable commitment towards good and towards respect of human dignity."

The former vice-president of the Generalitat, currently a suspended member of Parliament and MEP, quoted Petrarch at the beginning of his statement while pointing out that he studied at the Italian school: "It would be of little use to speak or right if nobody listened or read," he stated.

He expressed thanks for having the chance to speak and he defined himself "essentially as a father and a professor" who, in his later years, decided to get into politics "with a will to serve, to be useful, to build a fairer and freer world, a better world."

Junqueras, who is facing up to 25 years in prison on the charges of rebellion and misuse of public funds brought by the State Attorney General, has stated that he will maintain his democratic commitment:

"My work must be to always contribute, through the judgment of the ballots, to promote democracy, coexistence and the common good."

Josep Rull asks the court: Is this trial about ideas or about facts?"

Sànchez, to the court: "You have a responsibility, namely, not to make the political crisis any more severe"