The presiding magistrate of the Court, Manuel Marchena, declared the Catalan independence trial to be ready for judgment at 7:02 PM on Wednesday afternoon. After four months and 52 sittings, the public trial against Catalan pro-independence politicians and leaders who stand accused of rebellion, sedition, criminal organisation, misuse of public funds and contempt for the call of the 1 October 2017 referendum and the subsequent Unilateral Declaration of Independence has concluded.

From 12 February to this day, the courtroom of the Supreme Court that judged special case 20907/2017 heard 426 witness accounts and viewed hundreds of videos on two key dates: 20 September 2017, during the search in the Economy building, and of 1 October 2017, with the baton charges to attempt to prevent the referendum from being held.

Throughout the exact four months over which the public trial has extended, nine of the accused remained in prison on remand, from where they were moved in Guardia Civil lorries to the Supreme Court in a daily commute. The trial concluded with the closing statements by the accused

After the trial began with prior legal questions and the statements of the accused, the bulk of the trial was the witness phase. A total of 39 sittings were given over to witness accounts from 426 witnesses. The first to testify were politics such as Mariano Rajoy, Soraya Sáenz de Santamaría, Artur Mas, Cristóbal Montoro or Íñigo Urkullu.

Much of the witness phase was focused on listening to the witness accounts of approximately two hundred police or Guardia Civil officers who intervened in the operations on 1 October in an attempt to prevent the holding of the referendum, and who gave a practically identical narrative to the court in which expressions such as "hateful looks" and "human mass" were ever-present.

The parties to the defence attempted to counter the discourse of law enforcement with the witness accounts of scores of citizens who suffered police violence directly or indirectly in voting stations on the day of the vote.

All of this is left behind now. The trial is over and the Court presided by Manuel Marchena will begin a process of deliberation that will culminate with a sentence. As this is a trial in the Supreme Court, the sentence cannot be appealed as there are no higher courts that can reverse it.

Should the sentence condemn them, the accused will still have the option to lodge an appeal for protection of constitutional rights before the Constitutional Court. If they are denied, they may bring the case before the European Court of Human Rights. Bassa: "Contempt would have been to run on a programme and not to fulfil it" 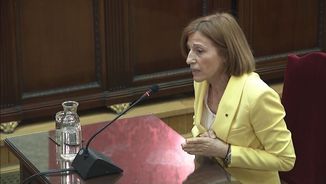 Forcadell: "I am being judged for who I am, not for my actions"