Forcadell: "I am being judged for who I am, not for my actions"
The former speaker of Parliament denounced that, during the trial, false testimony was used to incriminate her and differentiate her from the Board 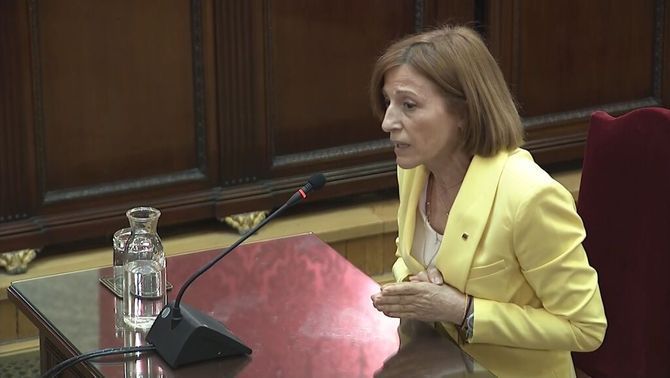 The statement of the former speaker of Parliament, Carme Forcadell, lasted less than ten minutes, and she began by insisting on the inconsistency of not being judged with her fellow members of the Board of Parliament by the High Court of Justice of Catalonia:

"When I first gave statement before this court in February it was already very difficult to maintain and understand for what reason and with what evidence I am being charged with the crime of rebellion, whereas my fellow members of the Board stand accused of contempt and will be judged by the High Court of Justice of Catalonia. Today, after 447 days of unjust imprisonment, and after 4 months of trial in which we have seen all the evidence and heard all witness accounts, it is entirely incomprehensible."

In the closing statements allowed to the accused in the Catalan independence trial, Forcadell insisted on the idea of her defence counsel:

"I state that I am being judged for my political career, for who I am, rather than for my actions. Proof of this are the desperate and bare-faced attempts to alter reality to sustain accusations against me."

Forcadell defended that the Board of Parliament complied with regulations at all times and deems this to have been proved during the trial.

"We defended freedom of expression, the right to initiative, to political participation of all Members of Parliament."

From the dock, the former Speaker of Parliament denounced that, throughout the trial, attempts have been made for her name to be quoted "as many times as possible" to incriminate her "with false testimony". Forcadell regretted that the parties to the prosecution did not take advantage of the situation to correct proven falsehoods.

"It seems that these four months on trial have been useless. All documentary evidence, all witnesses, all expert witnesses have been displayed here... for naught. The parties to the prosecution had the chance to change facts that had been shown to be untrue on trial in their writ, but they maintained them."

Finally, Forcadell defended that she defended freedom of expression in Parliament because "it is the essence of democracy."

"We cannot turn the Board of Parliament into a censorship organism that decides on what can be discussed and what cannot, because if we did so we would be limiting the rights and freedoms of citizens. Censorship must not enter Parliament."

As a tool to preserve the free votes of Members of Parliament, Forcadell called on "parliamentary immunity" because she deems it to be the basis of freedom and separation of powers.

"I will continue to defend it because I firmly believe in it, Your Honours."

Romeva: "Today it is us, but tomorrow it could be anyone"