Bassa: "Contempt would have been to run on a programme and not to fulfil it"
The former minister of Labour, Social Affairs and Family states that "none of the evidence submitted that refers to a criminal act by me has been verified" 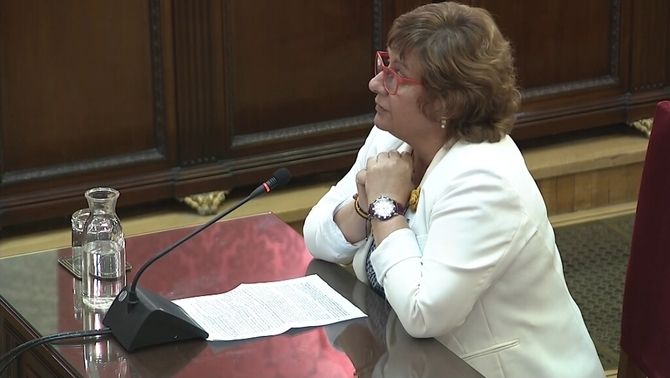 Former minister of Labour, Social Affairs and Family Dolors Bassa has stated that they have reached the end of the trial "fatigued and awaiting what will happen next." She added that, during the trial, "I have sometimes felt indignant, scandalised and, especially, saddened."

Bassa said that, "faced with the exposition of the arguments of the State Attorney General, we are faced with a trial with a political background." But, in spite of that, she continued by saying that "I maintain my beliefs beyond my term as Member of Parliament. I am still the same person. I am innocent."

She stated this by saying: "I am innocent, I would like to say it loud and clear: I am innocent, none of the evidence submitted that refers to criminal acts by me has been verified."

The former minister deems that "the defence counsels have dismantled the charges, which are baseless." With regard to contempt, she said that "I did not want to disobey the demands of 80% of the population that wanted to vote. And that is what we did, because this has been the democratic mandate." She stated that "Contempt would have been to run on a programme and not to fulfil it."

However, the categorically stated that "they will find nothing, not a single word, that promotes violence."

She added that "our way of advancing was to manage to negotiate. It is therefore far from the accusations of attempting to put the Constitutional order in check that have been levelled against us."

Joaquim Forn: "I am being condemned for my political ideas"