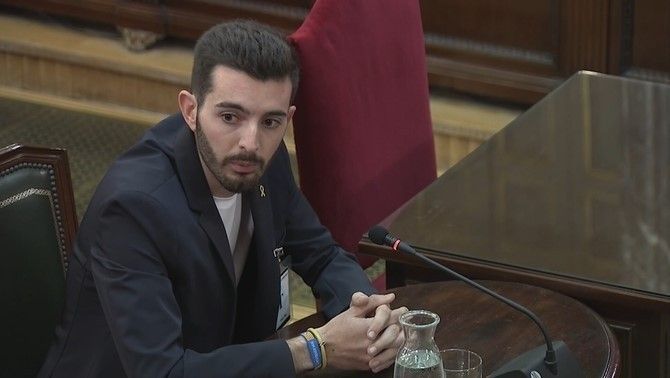 The first witness in the Catalan independence trial on Tuesday was Joan Porras, who was in the Institut Pius Font i Quer, in Manresa during the weekend of the 1-O referendum.

It so happens that Joan Porras is the real name of the young man known as Joan BonaNit, who decided to make it public before the Supreme Court.

This young man, who introduced himself as a university student, became famous for having spent months going outside Lledoners prison every night to wish the imprisoned political leaders good night with a megaphone.

As he said before entering the Supreme Court, he had always thought that he wanted to reveal his identity next to the prisoners.

"The Mossos d'Esquadra did not cause any damage"

Porras explained that, seven Mossos lorries went to the polling station where he voted on 1-O at 11 AM and took away the ballot boxes.

According to his narrative, the officers were not riot police, they negotiated with the people gathered and acted without confronting them:

Porras: "They formed a police cordon at the entrance and did not let anyone enter, but they did let them leave. They spent a while talking to three lawyers who were in the polling station. After having intervened and spoken for a few minutes, they entered the station, spent a few minutes inside and shortly afterwards left with some plastic bags. They had taken away the ballot boxes."

Pina: "Were there any violent actions by the Mossos when they entered to seize the material?"

Porras: "No, no. Never, no material damage or physical violence against anyone. They entered passing though the people sitting on the floor and did not harm anybody."

"They started to bang against the grates of the school"

When questioned by Jordi Pina, from the defence counsel of Jordi Sànchez, who had requested his testimony, Porras explained that he had spent the night from Saturday to Sunday inside the school with his family and friends, and that, on Saturday, what seemed to be a far-right group went there to shout at them:

"I remember that, at midnight, I went to the courtyard to breathe some fresh air with my sister when, suddenly, we saw flashes of light coming from the street, as if they were taking pictures. At that moment we saw how a group of 4 or 5 hooded people started to bang against the grate of the school, as if they wanted to leap over it, shouting 'Long live Spain', 'You bastards' and 'We will kill you!'"

"We quickly saw they looked dangerous and entered the school. We explained what was happened and I assume that they finally decided to leave when they saw we were not looking for trouble."

When he left, Porras greeted some of the accused who were sitting in the middle of the Court on his way out: