Forcadell: 11.5 years in prison for her "decisive role" in the creation of a "parallel legal system"
The Court deems that she created laws to mobilize citizens to exert pressure against the state "from her privileged position as speaker of Parliament" 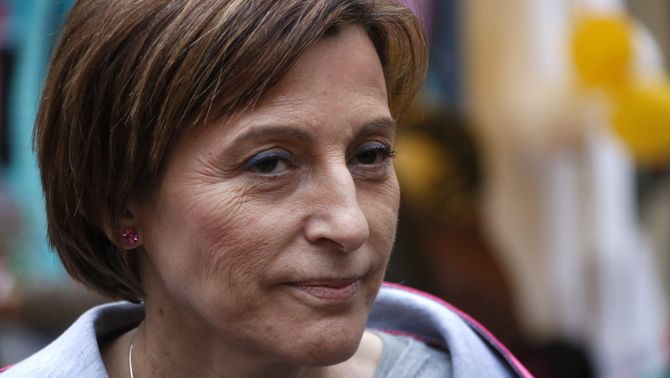 Former speaker of the Parliament of Catalonia Carme Forcadell has been sentenced to eleven years and six onths in prison because the Supreme Court found her guilty of the crime of sedition.

The injustice is now complete. Free parliamentary debate is not a crime, to exert it is a right and to defend it is duty. We will not tire from repeating it wherever it is necessary. Today is a dark day for democracy, but not even in times like this must defeatism triumph. We will prevail!

The court presided by Manuel Marchena justified the sentence as follows:

"That which justifies the sentence of Ms. Forcadell is her decisive role in the direction of a process of legal creation which, despite its more than obvious legal failings, acted as an illusory reference for citizens who would be mobilised as an instrument to exercise pressure against the state government."

The Government Attorney General asked for 17 years' prison on the charge of rebellion, as it did for Jordi Cuixart and Jordi Sànchez, the second longest sentence after Junqueras'.

The Government Attorney's Office, on the other hand, accused her of sedition and asked for 10 years' prison, also the second longest sentence requested.

The far-right party acting as the popular prosecution, Vox, asked for much more, 52 years on the charges ofrebellion and criminal organisation.

All three parties to the prosecution deemed that, as speaker of Parliament, Forcadell was a key part of the pro-independence process  by playing a "core role" according to Vox.

"I did not participate in any strategy" In her statement before the court in February, Forcadell, who was also a former president of the ANC, stated that she "only complied" with her position at the head of Parliament.

In this regard she stated that it did not involve delving into the subjects to be debated, because it would have implied "limiting and controlling parliamentary debates".

That is why she denied "having participated or directed any strategy", and she criticised "the politicisation" of the Constitutional Court which wanted, according to her, the board of the Parliament to become a "censoring organ".

"I am being judged for who I am" At the end of the trial, Forcadell used her closing statements to say that she was not being judged for what she had done, but for who she was, that is, for her political career.

She also insisted that she had only defended freedom of expression, which is "the essence of democracy", when at the head of Parliament.

Her defence counsel, Olga Arderiu, who asked for acquittal, stated that the parties to the prosecution were criminalising "an ideology" and a political project.

She added that, throughout the entire trial, they did not manage to prove a single charge against her, nor that she had participated in the organisation of the 1-O referendum.

She likewise roundly asserted that Forcadell complied with "parliamentary legality" at all times and that the prosecution was based on "assumptions, conjectures and inventions" of the State Attorney General. Carme Forcadell, in an archival picture as speaker of Parliament

From Member of Parliament for ERC to prison

Carme Forcadell was the first accused sent to prison by Supreme Court magistrate Pablo Llarena, on 9 november 2017, when she was accused of rebellion by the State Attorney General.

Forcadell, however, was able to pay the 150,000 Euro bail set by the judge and was free on parole by the next day.

Five days later, on 15 November, ERC announced that the former speaker of Parliament would be fourth on the list for Barcelona in the 21D elections called by Rajoy upon the application of article 155. Carme Forcadell with Marta Rovira and Raül Romeva, during the 21D election campaign

After the election JxCat proposed that Forcadell serve again as speaker of the isntitution, but she turned them down in early January, stating that it was a "personal decision".

Two months later, on 22 march 2018, and, when she was summoned before the Supreme Court, Forcadell also renounced her seat as Member of Parliament. Llarena sent her to prison without bail on the following day.

On that day, the magistrate also jailed Dolors Bassa, Jordi Turull, Raül Romeva and Josep Rull, none of which have left prison since.

From that moment onward, Forcadell concentrated on her defence strategy: she began by accusing Llarena of violating the Constitution with remand, and, in early June, she filed a motion for disqualification against him on the grounds of lack of impartiality.

In July, once the investigative phase was closed and along with the 8 other accused, the former speaker was taken from Madrid to Catalonia, first in Puig de les Basses prison followed by Mas d'Enric prison, where she could stay closer to her relatives.

In February 2019, coinciding with her statement in the public hearing in the Supreme Court, Forcadell was the first to take the case to the European Court of Human Rights in Strasburg. She alleged disproportionate remand with her case.