The State Attorney General during the trial: "What happened in Catalonia was a coup d'état"
According to prosecutor Javier Zaragoza, "it cannot be sedition because it was an attack against the constitutional order" 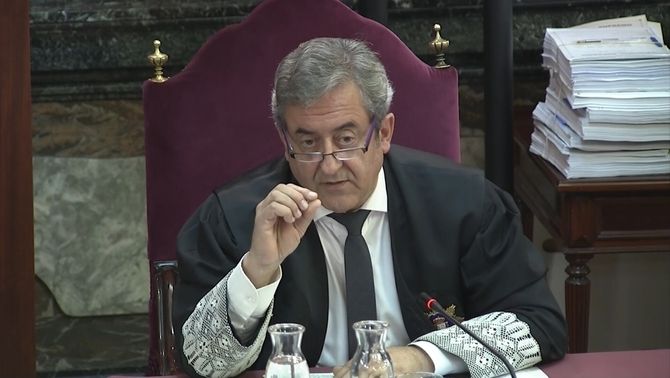 On Tuesday, the time has come for the parties to the prosecution to submit their definitive conclusions during the final stretch of the Catalan independence trial.

The first party to do so was the State Attorney General's office, which had already made these conclusions public last week.  In these conclusions, they maintained and reinforced the request for the accused to be condemned for rebellion as well as other crimes.

Zaragoza: "It was a coup d'état"

The spoken statement, made by the four prosecutors who participated in the trial, opened with Javier Zaragoza, stating that the so-called "process" was "a coup d'état".

He did so by quoting an Austrian jurist who suffered reprisals from the Nazis:

"What happened in Catalonia between March 2015 and October 2017, especially from the moment in which the eleventh term, which effectively launched this entire process, was approved, and especially during the months of September and October 2017 is, to use the terminology of Kelsen, an illustrious Austrian jurist who had to flee to the United States during the nineteen thirties before the rise of Nazism, is a coup d'état."

"It was a coup d'état which, according to Kelsen, is nothing but the substitution of one legal order by another through illegal means. And that is what the accused intended: to derogate one of the objectives included in section one of article 472 of the Criminal Code: to derogate, suspend or modify, fully or in part, the Constitution, and to declare the independence of part of national territory, which is the objective stated in section five. That is the 'process'."

It cannot be sedition"

Continuing along this line of argument, Zaragoza stated that this implied "an attack against the constitutional order", hence the charge of rebellion, not sedition, which, according to him, would only imply "an attack on public order".

"These exceptional circumstances prove that what there was and what it was, in sum, all of the actions that were committed, were an attack against the constitutional order, not an attack on public order. That is why it cannot be sedition. Sedition is an act against public order."

Zaragoza stated that there was violence, although he admitted that it was not "severe" or "armed", but he argued that "it is not necessary for there to be weapons or soldiers" for there to be rebellion.

Junqueras' "cynicism" was, according to Zaragoza, "the main driving force behind the rebellion" Zaragoza accused Oriol Junqueras of engaging in an "exercise in cynicism to an extent hitherto unheard of" in his initial statement in the trial:

"The accused Junqueras, who is a remarkable expert in the use of sophistry, argued in his initial speech, that was not cross-examined and with which he regaled us on 14 February, that the State never intended to dialogue, and, for this, he coined the notion or syndrome of the empty chair to blame the State for the lack of dialogue, for the lack of a solution to the conflict, and thus justify everything that had been taking place."

"I will put it otherwise: a man who has broken, and badly so, democratic legality, who has put himself beyond the boundaries of the law, who has refused outright to dialogue within the framework of institutions and within democratic channels, is blaming those who obey, comply with and respect democratic rules for not solving this question, precisely out of respect and obedience towards the Constitution and democratically approved laws."

"I believe this is worthy of many adjectives, but I would describe it as an exercise in cynicism to an extent hitherto unheard of."

According to Zaragoza, Junqueras was "the main driving force behind the rebellion":

"The accused Junqueras is, as it stands to reason, one of the main driving forces behind the execution of these criminal deeds. I would say he is the main driving force behind the rebellion, who has been pushing for these situations to take place for a very long time. This decision arises from the responsibility and leadership he has taken up in the development of the Catalan independence process."

Oriol Junqueras, covering his face during the statement of prosecutor Javier Zaragoza on Tuesday in the Supreme Court

"There are no political prisoners or arbitrary arrests"

The prosecutor stated that, in Spain, political projects are not criminalised, but what the accused did was to "break the constitutional order." He also denied the notion that they are political prisoners:

Zaragoza pointed out the ruling of the European Court of Human Rights from last week, which approved he suspension of the call for the Plenary session of Parliament on 9 October 2017 by the Constitutional Court.

The plan of the Mossos for October 1 was a "sham"

Zaragoza likewise stated that the police operation planned by the Mossos was designed to facilitate the referendum, and he described it as a "simulacrum":

"The plan of the Mossos had been designed to simulate that they were complying on October 1 whilst, in fact, assisting its celebration. Outwardly, they appeared to be executing the judiciary order of the High Court of Justice of Catalonia and the suspension of the Constitutional Court but, in practice, they consented to its celebration, because both the action guidelines and the instructions given to the Mossos excluded the use of force to restore legality and compliance with court rulings."

"I believe that, in fact, the entire design that was carried out by the Mossos on 1 October was a sham. It was a sham and the trap was, for instance, to change the dispositive part of the interlocutory order of 27 September for 6 words in the third line of paragraph three of the second legal grounds of the same, which stated: 'without affecting the normal coexistence of citizens'."

Moreover, he stated that then-Minister of the Interior, Joaquim Forn, "controlled" the Mossos at all times:

"He was kept constantly informed. He had absolute control over the Mossos at all times. And that is what mister Trapero did: to notify him of everything so that everything remained under control." Joaquim Forn, following the statement of prosecutor Javier Zaragoza, on Tuesday in the Supreme Court

Zaragoza, to the accused: "Respect the rights of others"

Zaragoza closed his statement, which lasted approximately one hour, by saying that the accused were not being asked to "renounce their beliefs":