Tension, insults and an absence of baton charges in the videos of October 1 submitted by the State Attorney General
A kick and a chair thrown at a police officer were seen in the Catalan independence trial, but tense moments and fragments of speeches by Sànchez, Cuixart and Forcadell predominate 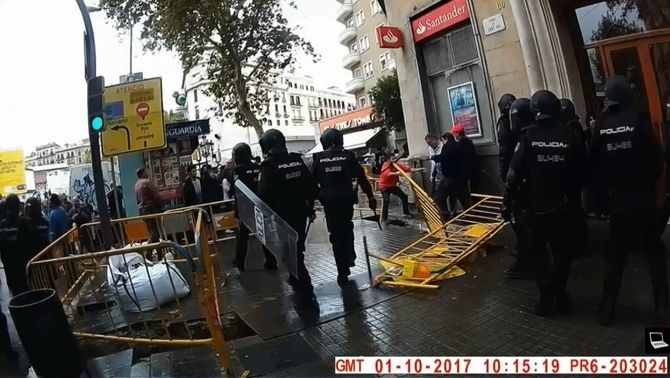 Struggles between police and demonstrators, people linked together and blocking the officers' way, shouts of "we are peaceful people", "we will vote", "they shall not pass", "out with the forces of occupation" or "sons of bitches". The only attacks, a thrown chair and a kick to an officer, and rocks thrown at the police operation. These are the scenes that were witnessed on Tuesday afternoon in the Catalan independence trial, the first day on which videos of September 20 and October 1 have been displayed.

Among the most striking images were the ones in Escola Mediterrània in Barcelona, recorded by a police officer's helmet camera. People can be seen resisting, shouting and policemen shoving the people aside. An elderly man can be seen receiving a blow in the first row, as well as a woman falling and a man a bloodied man due to a blow to the head.

The images correspond to this police action:

Unlike what happened in the morning, prosecutor José Moreno had done his homework and provided the location of the recordings, even though he did get them mixed up once or twice. For instance, attorney Benet Salellas warned him that he said that two videos which, in fact, corresponded to the Escola Nostra Llar, in Sabadell, and the Pau Romeva school, in Barcelona, were in the same location.

In the second case, a video in which the National Police seemed lost when leaving the surroundings of the centre, which was even slightly comical, was displayed. People shouting, banging pots and salvoes fired by withdrawing officers could be heard in the distance.

What had not changed from the morning is that the videos were watched in disorder - not grouped by polling stations - and some were repeated in the morning and afternoon sittings, to the point that judge Marchena had to say "next video, please." The statements in Catalan were heard in their original version and without subtitles.

"Motoercycles were thrown at them" were also displayed. This was not seen, but the footage did show demonstrators throwing fences, even though they could not be seen falling on top of anyone.

In general, most videos showed moments of tension between demonstrators and police officers, in which officers were shouted at and insulted and police action was resisted, apart from the two attacks. Here is the video of the kick to an officer in Sant Esteve Sesrovires on the day of the referendum:

Among the images displayed was the video of Sant Carles de la Ràpita with rocks thrown at the police operation after an intervention that injured 40 people in the town.

As was to be expected, baton charges on October 1, which will surely be seen in the turn of the parties to the defence, were not seen. After having heard about "human walls" in the trial, the videos submitted by the State Attorney General in the documentary evidence phase showed how the police had to withdraw in Roquetes, walking backwards and followed a few metres away by a large group of people. The mayor, Francesc Gas, proclaimed, megaphone in hand: "We have defeated them, because they have not taken away the ballots." People were also seen resisting the searches on September 20 in Sabadell, in the Unipost headquarters in Terrassa and Manresa or in front of the central headquarters of CUP. Mossos d'Esquadra were also seen charging demonstrators on a road on 8N, when article 155 was already in force. Curiously, images of the IES Pau Claris could not be displayed due to technical difficulties. The videos displayed at the request of the State Attorney General included videos of September 20 and of the following day, with speeches by Jordi Sànchez, Jordi Cuixart and Carme Forcadell, making calls to peaceful mobilisation, to go vote on October 1 and not to stop until the people arrested on 20 September were free.

In these videos they spoke of a "democratic revolt", as Sànchez did on 20 September, of a "united, gleeful and combative" people, as Cuixart did on 21S, or that "the best way to prove we are not afraid is by going to vote," as Forcadell stated on that same day. The State Attorney General expects these speeches to support an accusation of rebellion and, paradoxically, the defence counsels may also use them to plead for the innocence of the accused.

More speeches by the accused were viewed, such as when Jordi Sànchez, in an event in Montjuïc, said that there would be ballots on October 1 "because the government had committed to it." The advert with the rail junction was also displayed, as well as the October 1 institutional campaign and protests banging pots. For instance, there was one in front of the Guardia Civil barracks in Igualada, in which demonstrators warned the officers that "they would not sleep" in the city. Mossos taking away the ballots at the CEIP Francesc Macià, in Barcelona, surrounded by applause

With regard to the day of the referendum, the Court saw mossos taking away ballots after the polling stations closed and of people applauding the officers, saying "this is our police force".

With this selection, the Government Attorney's Office intends to prove the "passiveness" of the Mossos d'Esquadra corps before the vote.

Far-right party Vox, which acts as the public prosecution, has not added any videos to those of the other parties to the prosecution.

The sitting extended until half past seven, and there were still some videos that could not be displayed due to technical difficulties. These videos and those of the defendants, who have submitted around 300, will be seen during Wednesday's sitting.