Marchena sets 11 June as the end date of the trial
The Supreme Court intends to leave it ready for judgement on that day or the following, 12 June, providing the defendants with 15 minutes each to make closing statements 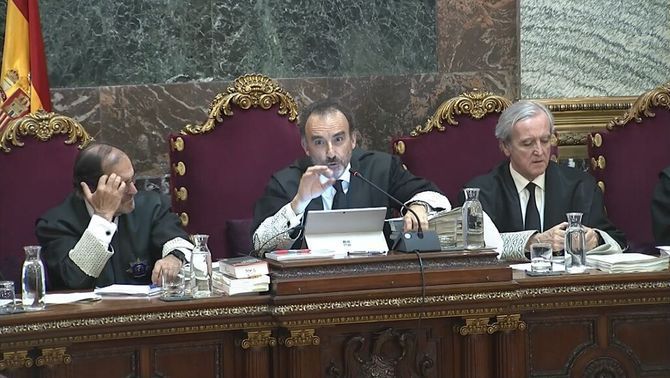 The Supreme Court intends to conclude the trial on 11 June, according to an informal statement by the presiding magistrate of the court to the defence counsels. Manuel Marchena intends to leave it ready for judgement on that day or the following, the 12th. Thus, the trial will have lasted exactly four months, having begun on 12 February.

The closing statements for the accused, on the 11th, with 15 minutes each

Once the expert witness and documentary evidence phases have concluded, the Court intends to have the reports from the three parties to the prosecution, the State Attorney General, the Government Attorney's Office and the popular prosecution exerted by Vox be made on 3 June, and to allow the defence counsels a few days to submit thei own on 10 and 11 June.

According to this schedule, Tuesday 11 will be the last turn to speak for the accused and each one of them would have 15 minutes. Once the statements of the 422 witnesses who passed through the Court have concluded on Thursday, the expert witness phases will take place this week. It is expected to conclude on Thursday itself or, at the latest, on Monday 27.

The documentary evidence phase will then begin, and it is expected to last from Monday to Wednesday of the coming week. In this phase, videos provided to the case are expected to be displayed

What financial cost did the use of polling stations on 1-O imply?

Surprise in the Supreme Court: the State Attorney General ends up renouncing the expert witness on the "Enfocats" document and the Moleskine agenda