The singer-songwriter and former member of parliament for JxSí expressed his disagreement with Vox to the Supreme Court "as a homosexual, pro-independence activist and aspiring citizen of the world" 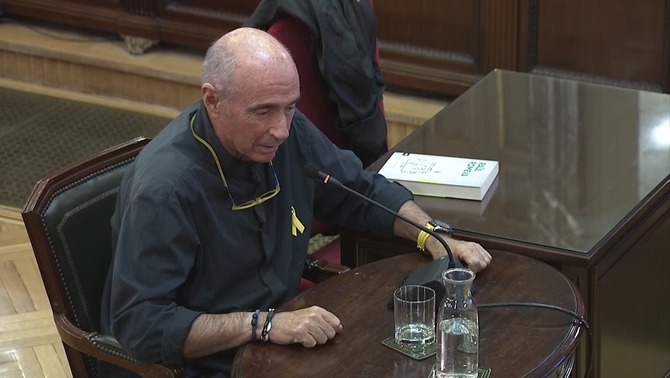 Lluís Llach manifested his displeasure at having to answer questions from far-right party Vox, the popular prosecution in the trial that called him to give statement as a witness along with the defence counsels of Oriol Junqueras, Raül Romeva and Jordi Sànchez, to the Supreme Court.

Llach began to answer questions asked by attorney Javier Ortega Smith on the gathering on 20S in front of the Economy building, and he highlighted that he was a "homosexual and pro-independence activist".

"I would like to express that, as a homosexual citizen, a pro-independence activist and aspiring citizen of the world, I disagree with having to answer questions from this..."

Judge Marchena answered that he had been summoned to speak about what he had perceived and reminded him of his obligation to answer questions from all parties:

"You are here as a witness essentially because you were present during the events that took place on 20 September. Therefore, the legal framework governing this act is exclusively that which allows the part that suggested you as a witness to ask some questions, and for you to answer them. After that, other parties to the prosecution and, ultimately, the defence counsels will, if they deem fit to do so, ask questions."

"However, keep in mind that you are here exclusively to answer about what you are asked, what you perceived. Your current statements, worthy of respect as they may be, are statements that are beyond the reasons for which you were summoned and the purpose of your presence here."

The singer-songwriter and former member of parliament for Junts pel Sí, who was the second and last witness on Monday afternoon, left the book of one of the accused and now also elected senator, Raül Romeva, which bears the title "Esperança i llibertat" [Hope and Freedom] on the table.

Llach explained that Jordi Sànchez and Jordi Cuixart asked the people present at the gathering to "act peacefully at all times" and that he was asked to intervene on account of his popularity.

"The Guardia Civil officers were respected at all times and they, in turn, were exemplary" "I can certify that the Guardia Civil officers were respected at all times, and that their behaviour was likewise exemplary, and that there were no problems with the Mossos..."

With regard to the destruction to Guardia Civil vehicles, he stated that he never saw any "acts of violence against the vehicles", but that there was a "mass of journalists" on top of them and that "this weight damaged the car roofs."

Neither did he see any objects being thrown at the police officers or any attacks or insults towards the Guardia Civil officers nor anyone spitting at them. He did hear people yelling at them. "Out with the occupation forces was one phrase that was often repeated", said Llach.

Llach insisted on the importance of the fact that all the gatherings in which he participated were peaceful: "We never take to the streets without the clear rule that all demonstrations should be peaceful and that, if anybody misbehaves, they should be singled out."

He suggested that Sànchez and Cuixart climb onto the cars

The singer-songwriter from Verges said that it was he who had the idea that the presidents of ANC and Òmnium Cultural should climb onto the Guardia Civil patrol cars:

Llach admitted that to call off the mobilisation on the night of 20S was no easy task as, first of all, many people answered by booing and whistling. "I remember that, the first time Jordi Cuixart proposed it, he turned around and gave me a look faced with the booing and whistling from the crowd."

Behind him were Roger Torrent, Jordi Orobitg, Eulàlia Reguant, Mireia Boya and Llach himself, who "encouraged" him before Sànchez's intervention, which "sealed the deal". Llach stated that he did not perceive "any tension" and he defined the role of Sànchez and Cuixart as "two responsible people who were trying to solve a problem."