Vox: "It is a criminal organisation because they had a stable and indefinite narrative"
The far right, which acts as the public prosecution, has quoted the king, the Guardia Civil and the National Police and the deceased magistrates Ramírez Sunyer, Romero de Tejada and Maza in its statement 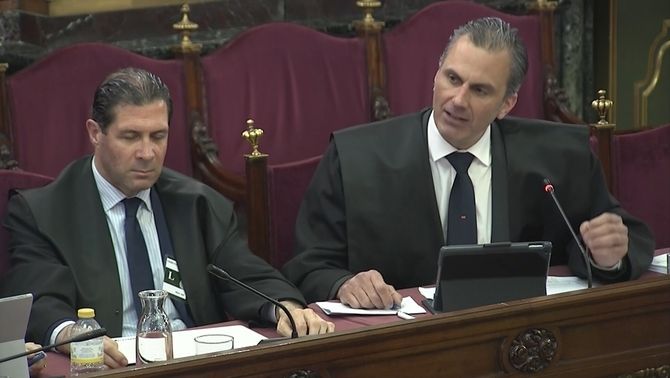 Vox has argued, in the closing conclusions of the Catalan independence trial, for why it is accusing the pro-independence leaders of criminal organisation. Javier Ortega Smith, secretary-general of the far-right party, referred to questions such as the fact that they acted as a group of "more than two people" or that their activity was prolonged over time:

"It is maintained in a stable fashion over time with two objectives. First, to form a transition government. And two, the execution of the new independent state through the government."

According to Ortega Smith, the Advisory Council on National transition, the 9N referendum, the ANC roadmap, the transition law or the referendum law, which configure a "stable and indefinite narrative", are proof of this continued activity.

Another requirement for criminal organisation highlighted by Vox is coordination:

"This criminal organisation had unity of action. The facts that were seen on trial were not committed individually. Even though individual behaviours are on trial, they belonged to a group. Those were perfectly planned actions." As evidence of planning, he quoted the Enfocats document. "It is not proof of the facts per se, it is proof of facts that had previously been proven, in which the strategy of the criminal organisation is reflected," he argued. "It is the roadmap on how to create one's own state by provoking political and financial instability, forcing the State to allegedly negotiate and, if the State did not give in, as happened, to carry out a forced referendum to declare independence."

He also added the creation of a public tax administration, judiciary power, a diplomatic service and a communications agenda in which they include TV3:

The popular prosecution has stated that the ultimate goal of the accused was rebellion:

"The criminal aim was, beyond all doubt, that of rebellion; the crime of disobedience and misuse of public funds were undeniably necessary, but the ultimate goal was rebellion. This rebellion attempted against the institutions themselves, unlike sedition, which only attempts against the normal functioning of these institutions."

Vox demands a sentence as a deterrent

For all of the above, and taking into account that Vox maintains the charges of rebellion and misuse of public funds against the majority of the accused, Ortega Smith defended an exemplary sentence that would act as a deterrent:

"There can be no justice if a sentence is not ruled with punishments in accordance with the severity of the crimes, the most severe that can be committed within a constitutional system. The crime of rebellion. Indeed, these sentences must fulfil a double goal: to punish, to sanction the guilty parties, but also to deter anyone from attempting against the constitutional order ever again."

If the sentence reflects these two goals, he added, "the rule of law, democracy, justice, national sovereignty, which belongs to the entirety of the Spanish people and, in sum, the Spanish nation will have triumphed."

Remembering the king and deceased police officers, prosecutors and a judge

The spokesman for Vox gave thanks and remembered, in his statement, the work of law enforcement agencies and the "professionalism, work, institutional loyalty and, why not, the courage of people who are sadly no longer among us today."

Javier Ortega Smith allowed himself to boast by reminding that the criminal charges against the Catalan independence movement did not begin "by chance", but rather through the complaint filed by Vox in investigating court number 13. The first part of the statement by Vox was given by Pedro Fernández, who highlighted the "most valuable task carried out by our heroic Guardia Civil, our heroic National Police" in the defence of "the authority demonstrated on 3 October by His Majesty the king in favour of the unity of Spain.

Fernández referred to the accused as the "accused participants in the coup" and said that "they wanted an innovative coup d'état to culminate into a de jure state." He also reminded that, as public office holders, they had "committed to preserve and comply with" the Constitution, "even if they did so with formulas to attempt to dodge this situation."

Vox is asking for sentences of 74 years in prison for the accused.