The State Attorney General displays videos of 20 September and 1 October and states being unable to identify them clearly in the Supreme Court
The defences object, Marchena asks the prosecutor to make an effort, to which he replies that "there was this climate in all polling stations" 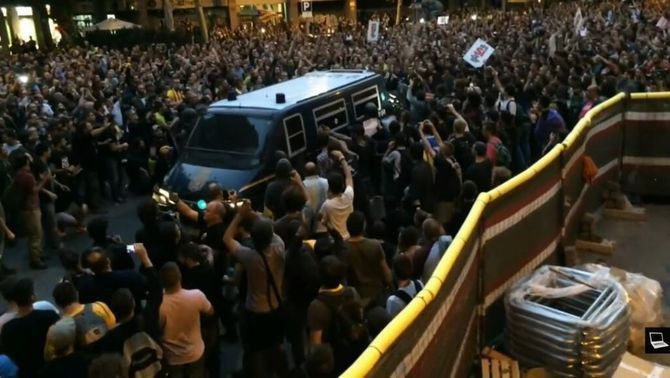 On Tuesday, videos of 20 September and of 1 October finally began to be displayed, in the documentary evidence phase of the Catalan independence trial.

At the beginning of the sitting the presiding magistrate of the court, Manuel Marchena, has refused to confront police coordinator on 1 October Diego Pérez de los Cobos and Mossos inspector Ferran López, as the defences had requested.

Once all doubts and requests from the parties had been solved, Marchena allowed for the videos requested by the State Attorney General to be displayed on the screens in the courtroom. Among the first videos to be displayed were some of the night of 20 September in front of the Economy building, with Jordi Cuixart and Jordi Sànchez addressing the crowd on top of a Guardia Civil patrol car.

In the following video you can see the same moment displayed by the videos requested by the State Attorney General as broadcast by TV3 that same night:

After these videos and a few more of the gathering in front of the Foreign Affairs building on 20S, they moved on to examples of police interventions on 1-O. One of the first videos was one that had been recorded in Montroig del Camp, in which Guardia Civil officers had to withdraw down a road under the pressure of a crowd that was advancing towards them.

Some videos that had been recorded in Sant Joan de Vilatorrada were also viewed, first in escola Joncadella, where the Mossos first intervened, followed by the Guardia Civil.

It was in this school that alderman Jordi Pesarrodona, who had risen to fame by donning a clown nose next to the Guardia Civil on 20 September, was the interlocutor with the police.

Also in Sant Joan de Vilatorrada, the prosecution displayed videos of the police intervention in the Institut Quercus, where the Guardia Civil broke down the door to be able to enter.

The defence counsels ask the prosecutor to identify the location

In some cases prosecutor Jaime Moreno stated the date and place of the images, but he failed to do so in some others because he did not know. That is why attorney Ana Bernaola, from the defence counsel of Jordi Sànchez, asked the State Attorney General to do so in all cases:

Bernaola: "It would be important for the State Attorney General to identify the date of these images, in order not to confuse an exit from the headquarters of a political party with 1 October, schools or polling stations, etc. Even if they do not know the location, they should at least provide the date."

Marchena: "The Court appreciates the comment of the defence to this end and what it represents from the point of view of its strategy, and that there are cases in which it cannot be stated."

Moreno said it was a video of 20 September in front of the CUP party headquarters, and he stated that it was written on the bottom part of the video.


Moreno: "There was this climate in all polling stations, everywhere"

However, this problem reappeared in other videos, and Marchena asked the prosecutor to state the date and location, to which Moreno said that was unimportant:

"May it please the court: the State Attorney General is being asked for an identification that contributes nothing with regard to what the parties to the defence know. They are perfectly aware of the location. In any event, it is not a question of the prosecution to point out if it was in this or that polling station, but rather, that there was this climate in all polling stations and everywhere. If I know where it is..." This statement by the prosecutor gave rise to hubbub in the courtroom, upon which Marchena called the court to order and asked Moreno to make an effort:

"For the parties to the defence, their statement on the place and time when it took place, especially from the point of view of the two scenarios, namely 20 September and 1 October, are important to them, according to their statements.

The question is simply that if the State Attorney General can provide this information, it should do so. If it cannot provide it, then so be it, but now is not the time to assess the relevant that this statement may have as, in principle, it is perfectly connected to the idea that there are two key moments and this interests the parties to the defence."

Marchena and the "difficulty" of the prosecutor

Attorney Jordi Pina, also from the defence counsel of Jordi Sànchez, repeated the objections of his colleague, and Marchena said the Court would take the lack of knowledge of the State Attorney General into account:

Pina: "Regardless of the timeframe in which the videos take place, at least for this party to the defence, it is especially important that the video be identified so that it may, on the day of the report, be cross-examined against those statements that..."

Marchena: "That is what the Court is asking them to do. There is no obstacle from the presiding magistrate for this information to be provided. The prosecutor has stated that there are times when this information is not available to him. In any event, what is clear is its importance for the defence and the difficulties the prosecutor is having to provide this information. We may take this into account on the day of the report."

At noon, the viewing was interrupted for a half-hour break.

The prosecutor cannot provide a date for videos of road cuts The sitting resumed at half past twelve with more videos requested by the State Attorney General. Specifically, videos of road cuts which Moreno dated on 3 October 2017 were displayed.

However, Bernaola pointed out that the people gathered were shouting "free political prisoners" and that, on 3 October, nobody had been jailed yet, and the video should therefore be a video of the strike on 8 November, at the earliest.

It was followed by several more videos of cut roads as well as train tracks in Sants station broadcast by mdeia such as Libertad Digital and which the prosecutor was likewise unable to put a date on.

After that the videos returned to 20 September, displaying the demonstration and the famous damaged Guardia Civil patrol cars in front of the Economy building.

Cuixart's defense seeks his release based on the UN experts' report