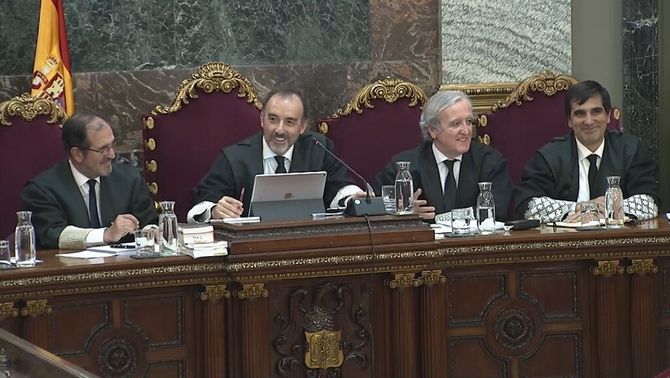 They did so in their report on the tenth week of the trial, in which they state that this is a generalised trend throughout the trial:

"A tendency of the presiding magistrate of the court, which was obvious from the first sittings of the trial, has been reaffirmed; it is a tendency to promote the subjective tale of the witnesses of the prosecution, especially when they recreate scenes of demonstrators in action."

The prosecution is basing its accusatory narrative on scores of Guardia Civil and National Police officers who participated in the events that took place in Catalonia between September and October 2017.

Doors closed to seeking out contradictions

According to the observers, this stands in stark contrast with the limitations faced by the defence counsels "when they intend to contradict the statements of witnesses", previously, during the questioning by the prosecutions:

"Thus, nearly all doors have been closed when it comes to contradicting the orchestrated statements of these scores of civil servants."

The observers highlight that these limitations also include displaying the videos to the witnesses to check them against their statements.

The observers have also once again highlighted the "nearly identical narrative" of the Guardia Civil and National Police witnesses, and they added that they suspect that they are being directed by their leaders.

According to them, some of these chiefs "share a murky police past":

"Throughout these weeks we have seen - and we have denounced it - that they share a practically identical narrative, which could originate in the statements of their leaders."

"Moreover, some of these leaders also share a murky police past including cases of torture, mistreatment, death of arrested parties or the justification of the aforementioned."

"These strings of statements may therefore have been originally contaminated by civil servants involved in very murky events."

The observers highlight in this case that Guardia Civil commander TIP N29100C, who gave statement this week, was absolved by the Supreme Court of the crime of torture.

ITW highlights that he was found guilty in first instance and, especially, that it was not said in the trial that the European Court of Human Rights condemned Spain over this case.

There were three observers this third week: Daniel Turp, Stéfanie Tougas and Anthony Beauséjour, all of whom are members of the IRAI, the Research Institute on the Self-Determination of Peoples and National Independence from Canada.