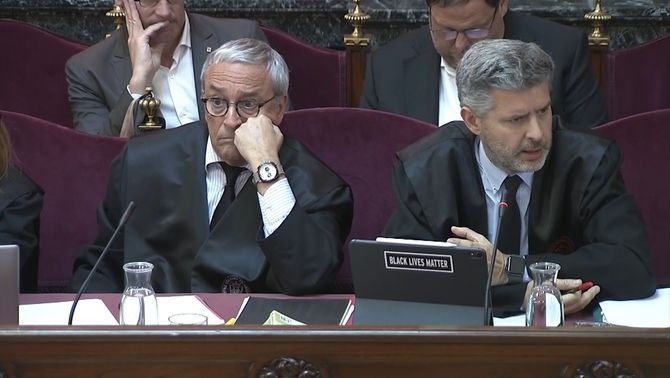 The attorney of Oriol Junqueras and Raül Romeva, Andreu Van den Eynde, has challenged a good part of the documents submitted by the parties to the prosecution in the documentary evidence phase in Court on Monday.

Van den Eynde did so after the State Attorney General and the Government Attorney's Office listed all of the documents they deem the Court should take into account in this case. Vox accepted the list put forward by the prosecutors as its own.

Junqueras' defence counsel challenged a good part of the documents because he deems them to be new evidence due to the fact that the parties to the prosecution had not proposed them earlier:

"Evidence is proposed in provisional pleadings and in prior legal questions of the trial."

"The parties to the prosecution are requesting new evidence in these proceedings, and this is not possible." The "general and prospective case" of Court number 13

The attorney likewise challenged the documents generated during the investigation of prior cases, as in the National Court and Court number 13 of Barcelona, which he deems to be a "general and prospective case", for a violation of fundamental rights:

"There are elements in the plenary session that prove that the case of investigating court number 13 is a general and prospective case, in which interference with fundamental rights and, especially, in the search resolutions of 20 September, on phone tapping, transfer and analysis of all communications of the Catalan government and, in essence, of any ancillary legal proceedings in the context of a prospective case."

Van den Eynde stated that, during the investigative phase, not only were fundamental rights breached, but the documents that were generated were not subject to legal cross-examination.

Van den Eynde also challenged videos which the prosecution admitted "had been edited beyond judiciary control" and that this invalidated their "originality" and "reliability" as evidence. He did so because he deems all of these documents, which he has defined as "duplex" documents, are useful to prove the innocence of his client:

"This defendant deems that all documents submitted for the consideration of the Court by the parties to the prosecution are duplex documents insofar as they are not only useful to the Prosecution, but also to the Defence. We understand that they all sufficiently support the point of the defence, and will not challenge any."

With regard to the defence counsels of the rest of the accused, they all joined the challenges submitted by Van den Eynde one by one and for the same reasons.

"These documents were obtained behind the backs of the defence counsels: obtained in other proceedings, specifically, in investigating court number 13, in which this party to the defence was not presence and was unable to intervene, thus violating its right to defence." "Their authenticity has not been confirmed"

Bergés likewise described the reasons for challenging other documents that have been submitted, for example, email messages which, according to him, are of unexplained origin:

"We refer to the email messages that open file 10, as the way in which they were obtained is not stated. In other words, it is not stated if due guarantees in the process to obtain them have been respected, nor has their authenticity with regard to their contents or authorship have not been confirmed."

In this regard, Olga Arderiu stated that the parties to the prosecution put forward tweets attributed to their client, Carme Forcadell, which a witness admitted he had written in her name without consulting with her during the trial.

Some of the attorneys, in fact, challenged all evidence put forward by the prosecution on Monday "as a whole".

Among these documents are Guardia Civil reports or news from the press, which the defence deem not to be acceptable documents in a trial.

Marchena has said that the Court will rule on the challenges to documents submitted by the defence counsels at the end of the documentary evidence phase.

With these challenges, the presiding magistrate of the Court closed the Monday morning session of the Catalan independence trial. Melero to Marchena on the documentary evidence phase: "I do not understand this procedure"