Marina Roig: "The Constitution cannot be understood without the mobilisations of the seventies"
The attorney of Jordi Cuixart denounces that the prosecutions are criminalising fundamental rights to sustain the charge of rebellion in the Supreme Court 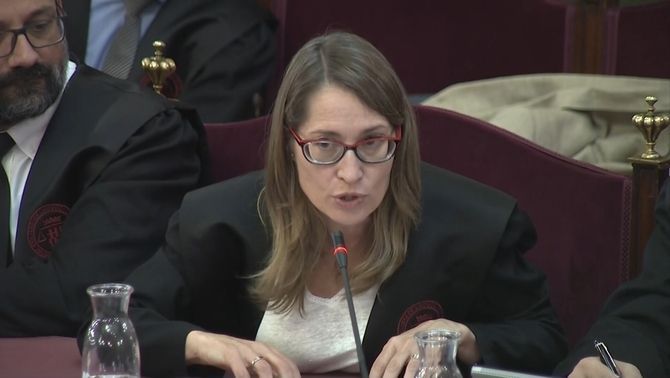 The defence counsel of Jordi Cuixart, Marina Roig, focused her final conclusions on the defence of the rights to reunion and demonstration, which she deems the parties to the prosecution to have criminalised.

"There is no Constitution without rights"

According to her, the State Attorney General cannot attribute itself the ownership of the Spanish Constitution or its defence, and she added that it cannot be defended with "the criminalisation of collective participation and social mobilisation":

"Throughout history, demonstrations have been crucial to criticise repression and to demand that democratic governments behave responsibly. The Spanish constitution cannot be understood without the demonstrations of the seventies."

The attorney continued by arguing that none of the documents the prosecution is based on suggest a use of citizen mobilisation as a tool for insurrection. Mobilisation as a right, not as a threat

Referring to international jurisprudence, Roig stated that it recommends a vision of mobilisation as a fundamental right above principles such as the unity of Spain, and that this is being violated in this trial:

"The term 'to demonstrate' implies dissent, opposition, a response or reaction. Nevertheless, instead of seeing demonstrations as a legitimate element of democratic society, certain powers of the State treat them as if they were a threat, something to be controlled, discouraged or suppressed through legislation, policies, practice and, most severely, criminal law."

"The accusation levelled against Jordi Cuixart stems from this conception of demonstrations, of citizen mobilisation, as a threat. It is an attempt to repress this fundamental right."

"The term 'to demonstrate' evokes, for some, movements for social justice and the positive exercise of rights: for others, it is associated to disorder, chaos, unease and defiance or threats to authority. We have heard statements from law enforcement officers who conceived the demonstrations that took place in front of their barracks as defiance or threats to the authorities."

The distrust of the Guardia Civil on September 20

The attorney focused on September 20, the moment in which the parties to the prosecution relate Cuixart to the "insurrection" and rebellion, and she insisted that he only participated in the demonstration in front of the Economy building.

Roig argued that, on that day, judiciary actions were in no way hindered and that both Òmnium and the ANC, as well as all the people called, merely exerted their fundamental rights.

The attorney also stated that the parties to the prosecution have exploited the misunderstanding that arose between the different police cultures of the Guardia Civil and the Mossos:

"To begin with, the two lieutenants who were to be in charge of security and the responsibility of this search were not aware of the existence of a mediation area in the Mossos d'Esquadra. They did not know, they did not understand, at first, which were the functions of those Mossos, and they did not understand that Sànchez entered the ministry at any time or that he had interlocution with the Mossos.

"They started from an absolute distrust towards Sànchez's demonstrations and those of the ANC volunteers."

The State Attorney General's "scorn" towards the UN

Roig defended the report from the Work group against arbitrary arrests of the UN, which asked for the freedom of the parties accused in this trial.

She also complained about the "scorn" displayed by the State Attorney General towards this report, reminding that Spain participated in the proceedings: "

"With regard to the scorn displayed by the prosecution towards this opinion, I must point out that Spain was a part of the proceedings followed before the arbitrary arrests group and has been able to make statements on the subject and explain that the arrest of Cuixart emerged from judiciary proceedings in which crimes of rebellion were being judged, providing the documents and statements it deemed fit, and the work group issued its opinion."

"It is surprising that the prosecution scorns this opinion insofar as the European Court of Human Rights grants the category of protection of human rights to the UN group on arbitrary arrests, and that the recent ruling 1263/2018 of 17 July of the third courtroom of this Supreme Court states "the obligation of courts to comply with the opinions and comments of other human rights organisms of the UN."

The "violence" of September 20 and October 1, rebellion and sedition

Roig went over the most remarkable incidents of 19 and 20 September 2019, and she deemed that none of them were violent, and that there were only "some isolated incidents."

The attorney stated that Cuixart never made any calls to violence and that "he always asked for peaceful resistance from citizens."

With regard to October 1, Roig stated that "no citizen" attacked the police operations, and that she deemed that it had been proven through the videos viewed during the trial.

Moreover, she stated that the injured people on that day cannot be attributed "to mister Cuixart or to the rest of citizens", but rather, to "a disproportionate police intervention."

Roig concluded by asking for the acquittal of Jordi Cuixart, and she denied that demonstrations may constitute crimes of rebellion or sedition.

Arderiu says Carme Forcadell is being judged "not for what she did, but for who she is"

Pina denies rebellion and sedition: "Those are not uprisings. Those are protests and demonstrations"