Seccions
Anar a la navegació secundària
Marchena corrects himself and allows the defence to ask about incidents in a hotel in Calella
Defence counsel Bernaola complained that the parties to the prosecution had been able to ask about the events, and the witness stated that Guardia Civil officers urinated on people on the night of October 1 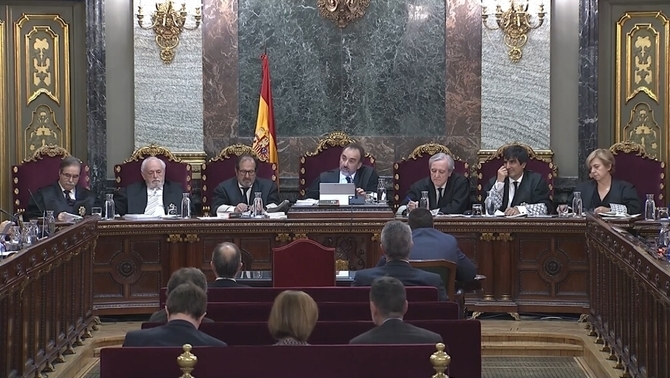 An unexpected moment took place in the Catalan independence trial being held at the Supreme Court. Judge Manuel Marchena corrected himself and accepted a question he had deemed inappropriate only a few minutes earlier. This took place during the questioning of Josep Grima, a businessman who was at the Escola Pia in Calella on October 1, with regard to incidents that took place with the Guardia Civil in that town on that specific night.

After speaking on how he experienced the day of the referendum, attorney Ana Bernaola asked him about how coexistence with the Guardia Civil officers who stayed at two hotels in Calella was. Josep Grima testifying before the Supreme Court on Wednesday

The witness began to speak of a "small gathering" in front of the Hotel Vila, where some of the officers were staying, and which had been called, according to him, in condemnation of the action of the police on October 1 in neighbouring towns such as Sant Cebrià or Sant Iscle de Vallalta.

"At one given moment one person, allegedly a Guardia Civil officer in plainclothes carrying an extensible baton began to run. They knocked the lads to the ground and hit everyone they found," said the witness. The attorney asked about the people's attitude and Marchena asked her to get the questioning back on track:

"Let us focus on the vote. Anything else is beyond the scope of this trial."

Bernaola replied that she was asking the question because "the State Attorney General discussed this incident with the police officers". Marchena, however, stood his ground and insisted that what the witness was saying was "unrelated to the object of the trial." "You may formulate an objection if you wish," he added. The defence counsel did so and concluded her questioning.

The surprise came after the turn of the parties to the prosecution, when the presiding magistrate corrected himself:

"If you wish, you may ask what was declared inappropriate earlier."

Bernaola, from the defence team of Jordi Sànchez, Jordi Turull and Josep Rull, asked him if the fifty or so people who had gathered in front of the hotel had a violent attitude towards the Guardia Civil. The witness said they did not, that they shouted "we have voted" and that, in any event, those who had a "surly attitude" were the officers who, according to his statement, urinated on the people:

"I was spat on by one of the Guardia Civil officers from one of the balconies of this hotel. Their attitude was even a bit defiant, playing with weapons, with extensible batons, and it seems that they even urinated on some of the people gathered there, because we noticed how things fell on us from the balconies. The provocation was certainly not from our side."