Junqueras before the Supreme Court: "I deem myself to be a political prisoner"

The former vice-president, accused of rebellion, states that neither being pro-independence nor the referendum are crimes 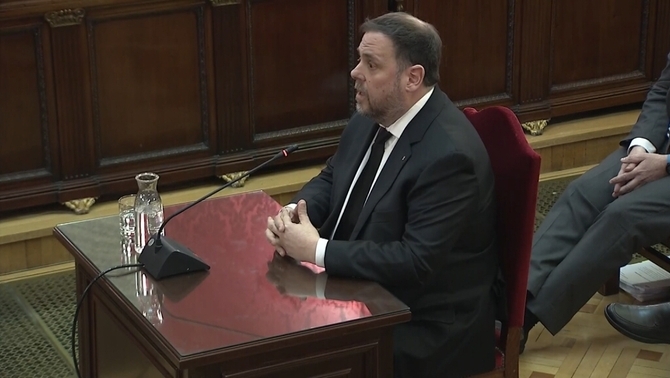 The Catalan independence trial has reached its third sitting on Thursday and has allowed us to hear the voice of the accused for the first time. This took place once the presiding magistrate of the court, Manuel Marchena , outlined which of the prior requests of the defence counsels had been accepted and which had not. .

Former vice-president of the Catalan government Oriol Junqueras was the first of the twelve accused who began by answering the questions of his defence counsel, Andreu Van den Eynde.

Before the start of the sitting we were informed that Junqueras would answer none of the prosecutor's questions, including the State Attorney General's Office, the Government Attorney's Office and Vox.

Junqueras opened his speech by stating that he was in a situation of defencelessness due to the fact that he was being judged for his ideas, and he defined himself as a political prisoner:

"I understand that I am in a political trial, that I am an elected representative and that I therefore owe myself to my voters; I will not answer the questions of the prosecutions."

"I am a member of parliament and candidate in the European elections, I held office as mayor of Sant Vicenç dels Horts, as vice-president of the Catalan government, an office from which I was deposed in application of article 155 of the Constitution, and I currently deem myself to be a political prisoner."

Related article: Junqueras: "The purpose of violence against voters on 1-O was to create tension"

He argued this point by stating that the actions of which he stands accused are not crimes:

At the beginning of his statement, the former vice-president criticised the lack of simultaneous translation and announced that he would speak in Spanish "after a year and a half of forced silence":

"I would like to reflect on the subject of language: consecutive translation is not very practical as it does not allow us to speak in our native tongues. In any event, it is a pleasure for me to speak in Spanish as it gives me the opportunity of addressing the entirety of Spanish citizens after a year and a half of forced silence." In the answers to his defence counsel, Junqueras outlined his political career in Catalonia and in Europe, and defined himself as a federalist and pro-European:

"I belong to ERC, a party with 88 years of history that has always fought for freedoms, social justice and equal opportunities, that defends the independence of Catalonia and is not affected by any corruption scandals."

"I have belonged to the Greens Group inthe European Parliament, which is the most federalist and pro-European group in the Parliament, because we defend a federal Europe and that is fully in line with all of my words and deeds."

The former vice-president, accused of rebellion, has stated that the right to self-determination has applied many times, as promoted by Western democracies:

"The seat in front of us has always been empty"

With regard to the political conflict in Catalonia, Junqueras carried out a historical retrospective since the approval of the new Catalan Statute of Autonomy  in 2006, recalling the PP's signature collection campaign "against Catalonia" and the 2010 ruling of the Constitutional Court which removed significant aspects of it, some of which, he has said, are currently in force in other statutes of autonomy.

According to Junqueras, the attempts of Catalan pro-independence parties to negotiate a political solution with the central administration have failed because of a lack of valid interlocutors:

"It is a cruel irony that those who systematically refuse dialogue accuse those who want dialogue to play rhetorical games."

"And what is the situation? We attempt to sit down at a negotiating table, and the seat in front of us is always empty. It is always empty, always, and (the other party) delegates its political responsibility to the courts of law."

Junqueras has stated that there is "a significant part" of Catalonia that supports the pro-independence project:

"There can be no doubt that these demands were the wishes of a significant part of Catalan society. Some may even think that we are few. But surely this cannot be solved by putting people in prison." The pro-independence movement has never been violent

With regard to the violence of which the pro-independence movement is accused, Junqueras has said that this statement is false and has appealed to the narrative of the international media:

"Demonstrations in Catalonia have always been peaceful. The media from the world over have said so."

Junqueras has stated that being in favour of independence is not a crime, and neither is holding a referendum, and he added that this was specifically withdrawn from the Criminal Code:

"Preventing people from voting through force, now that is a crime."

Oriol Junqueras has highlighted the fact that the Constitutional Court even shut down attempts to discuss the options of the pro-independence movement:

"Not even the PP opposed a study committee in the Parliament of Catalonia which was subsequently shut down by the Constitutional Court which, from my point of view, proves once again that we are faced with a persecution of ideas, of political difference, of political dissidence." "We will continue trying regardless of the results of these proceedings"

The former vice-president has quoted the words of international treaties on situations similar to that of Catalonia and has stated that this trial will not make the pro-independence movement stray from its goals and from its methods:

"The application of the democratic principle, which is reflected in international treaties, states that when there is a peaceful citizen request that is repeated through times and significant in its community, it must be given a political solution, which is what we have attempted, will attempt and will always continue to attempt."

The former vice-president of the Catalan government, accused of rebellion, has stated that he loves Spain and that he seeks "recognition between equals":

"If I may say so, I have often said, both within and without Parliament, that I love Spain, that I love the people of Spain and Spanish culture. I have said so often, because it is true."

"How is this compatible with the fact that I am a Catalan republican? Because I am convinced that the best way to preserve this coexistence and these good relations is precisely a recognition between equals that is the fruit of the democratic will -if indeed it is such- of the citizens."

"And were it not so, we would respect it. As always. Always. Because we have lost on countless occasions. Or haven't we? We have lost frequently. And what have we done? We have always respected it."

"What we are doing is to peacefully, and even cordially -if I may say so myself- construct a political project that is capable of giving rise to a democratic majority around it. Ballots are often a solution; not the only solution, but they are essential in any solution." The prosecutions point to him as one of the main figures in the promotion of the referendum from Parliament and the Catalan government, as well as through social actions, and they argue that his department controlled the preparation and execution of the vote.

He has been in custody since 2 November 2017 and attorney Andreu Van den Eynde is in charge of his defence.

Junqueras to be followed by Joaquim Forn

Once the questioning of Oriol Junqueras is completed, the floor is expected to be given to the former Catalan minister of the Interior,  Joaquim Forn.

The State Attorney General is asking for 16 years' prison for rebellion and embezzlement for Forn, who has also been in custody since 2 November 2017.

Both the State Attorney and the Government Attorney believe that his role was to ensure the support of the Mossos d'Esquadra towards the referendum.