Jordi Turull: "I am here because I did not renounce my political activity"
The former minister of the Presidency states that to confuse disagreement and criticism with a lack of respect or an attack "only happens in insecure or authoritarian mindsets" 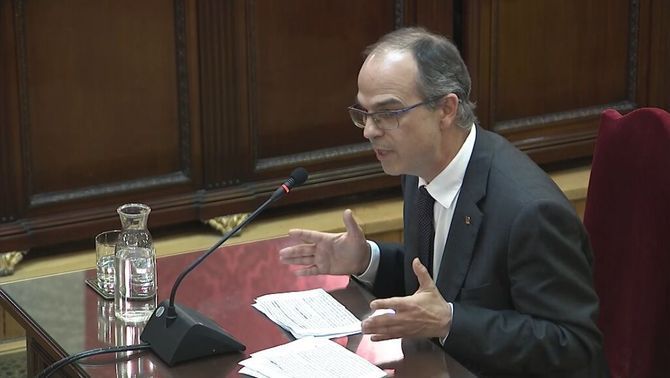 Former minister of the Presidency and former spokesperson of the government Jordi Turull has stated that the origin of the charges is that they "confuse disagreement and criticism with a lack of respect or an attack, and that only happens in insecure or authoritarian mindsets."

According to Turull, either there is a mix-up or "they intend to apply different rules to pro-independence activists to other mortals."

Turull believes there is the will to create "a deterrent at the cost of whoever it may take, even if it implies going back many years in terms of democracy and interpreting the rules of the game differently.

He also spoke of "panic" when he heard the State Attorney General say "a referendum is and will be a crime even when it is decriminalised." "The principle of legality - he added - is no more."

According to Turull, there has been a lack of rigor in dates, people and locations and a significant lack of knowledge on the functioning of the Catalan administration. He has also stated that "the extension we grant to fundamental rights and freedoms is at stake, because if the interpretation of the State Attorney General is accepted, we will return to bygone times."

According to the accused, everything has political roots and "some people want to solve political problems with criminal solutions." He insisted: "We have always opted for dialogue and the Spanish government has always given us silence or scorn."

Turull has stated that "the will of the people of Catalonia will not be extinguished." Catalan society, according to him, "regardless of what you may think, is an adult society with a will of its own. They are not sheep and violence has never, through action or omission, been a part of its code of conduct." According to Turull, "on October 1 there were emotional looks. There were no human walls, there were mountains of dignity."

He closed with words of gratitude and commitment towards his defence attorneys, to the thousands of people who have not left him feel alone "and for how they have always done so, with ever-peaceful activism." He concluded with emotional thanks to his family. He closed his statement by saying: "I am here because I did not renounce my political activity."

100 years in prison for the 1-O government, the speaker of the Parliament and the presidents of Òmnium and ANC

Joaquim Forn: "I am being condemned for my political ideas"