The Supreme Court sentenced former Minister of the Interior Joaquim Forn and former Minister of the Territory and Sustainability Josep Rull to 10 and a half years in prison on because it has found them guilty of the crime of sedition. The Court has likewise condemned both former ministers to 10 and a half years of disqualification from public office. The Supreme Court acquitted them both of the charge of misuse of public funds.

Supreme Court clerks travelled to Lledoners prison to notify Joaquim Forn and Josep Rull, as well as the other pro-independence prisoners held there, of the sentence.

With regard to Josep Rull, the sentence states that:

"He was fully aware of the breach of the law and of Constitutional Court orders. He actively participated by laying the bases that propitiated the mobilization of the citizenry. He participated in calling and carrying out the referendum. He laid down the conditions to prevent the functioning of public services and the action of the State in accordance with the law. He prevented the mooring of the Moby Dada in Palamós port and, likewise, he made the premises of his ministry available for the referendum."

With regard to Joaquim Forn, the Court deems that:

"He concealed his true intention, namely, to have the Mossos not disturbe the referendum, under the pretense of preserving coexistence"

Both Forn and Rull have already given statements over Twitter. Former minister Rull states that they have sentenced the 2 and a half million Catalans who voted on 1 October:

Joaquim Forn gave thanks for the support he is receiving:

Thank you for your support.

Thank you, because we know you are always there.

We are not discouraged.

Between 11 and a half years and 74 years

The popular prosecution exerted by far-right party Vox asked for a much longer sentence: 74 years for rebellion, criminal organisation and misuse of public funds.

All three parties to the prosecution asked for the same number of years for Forn as for his colleagues in government Raül Romeva, Jordi Turull, Josep Rull and Dolors Bassa.

They did so despite the fact that the role of the Mossos on 1-O, led by Forn as their political head, took up a large part of the public hearing. In his statement during the trial, Forn stated that the Mossos never received any "political instructions"  from him to facilitate the referendum.

He also stated that the Catalan regional police followed court orders issued on that day at all times, and that the National Police and Guardia Civil, on the other hand, did not. In his closing statements at the end of the public hearing, the former minister of the Interior stated that he would be condemned for his "political ideas" and he defended the value of 1-O.

In his closing statements his defence counsel, Xavier Melero, admitted that Forn disobeyed the Constitutional Court , but said that he also facilitated the police deployment requested by the Hight Court of Justice of Catalonia to prevent the 1-O referendum.

He also said that the actions of the National Police and the Guardia Civil on that day were carried out to "publicly discredit" the referendum, not to prevent it, because they could not. In this regard, he stated that the coordination colonel Diego Pérez de los Cobos was charged with was "a fraud".

He also complained that the court did not accept to cross-examine de Pérez de los Cobos with Mossos inspector Ferran López as he requested.

To round off his argument, Melero stated that there was no rebellion or sedition because the Generalitat government "abandoned power" when Rajoy applied article 155.

He also stated that this application "worked perfectly" and that the Carles Puigdemont government "failed to comply" with the commitments regarding the 1-O referendum.

From Belgium to prison

After 27 October 2017 and after he had been removed as Minister of the Interior through the application of article 155, Joaquim Forn chose to go to Belgium with other members of Carles Puigdemont's government.

However, he returned immediately, on 1 November, and, on the following day, National Court magistrate Carmen Lamela sent him to prison, where he has remained to this day. On 3 December, and unlike the rest of the accused, Supreme Court magistrate Pablo Llarena kept him on remand, along with Jordi Cuixart, Jordi Sànchez and Oriol Junqueras, by arguing that he did not deem there to be a risk of flight among the four, but that there was a risk of "repeat offence".

After running as number 7 for Barcelona in the JxCat list in the 21D regional election, Forn chose to resign as Member of Parliament one month later as a defence strategy to leave prison on bail.

He argued that, days earlier, giving statement before Lamela, he had explicitly renounced unilateral means to achieve independence, and that that could clash with his work as a member of parliament for JxCat.

However, his role as top political head of the Mossos on 1-O influenced the investigative phase, and all subsequent requests for freedom on bail were denied to him, the statement given against him by Guardia Civil colonel Diego Pérez de los Cobos being put forward as the main reason.

Running for mayor of Barcelona

In December 2018, Forn joined the hunger strike started by his fellow inmates Jordi Sànchez and Jordi Turull in Lledoners prison to protest that the Constitutional Court did not process their requests for freedom on bail.

After that, he renounced his rift from politics a year earlier, and he accepted to head the JxCat list for Barcelona Town Hall in the 26M election. The court presided by Manuel Marchena allowed him to attend the constitutive session of the new town hall, but later did not allow him to hold his position and attend town hall meetings.

Despite this, Forn intends to run again at the head of the list for his party in the 10 N general election for Girona, whereas Jordi Sànchez, Josep Rull and Jordi Turull will run for Barcelona, Tarragona and Lleida, respectively.

"A trial of ideas or facts?" The former Minister of Territory and Sustainability Josep Rull said that he was "very proud" of having signed the decree calling the 1-O referendum and that it had been "an honour".

Rull likewise stated before the Supreme Court in February that the Constitutional Court has "a significant deficit of moral authority" because it is politically "instrumentalised".

In his closing statements in June, the former minister asked himself it that was "a trial of ideas or facts", and he stated that it was a part of a "scenario of negation of politics". 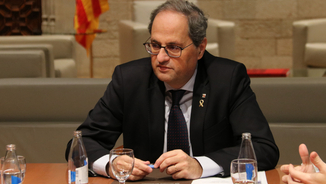