Day 1 of the Catalan independence trial in 10 sentences: the complaints of the defence counsels 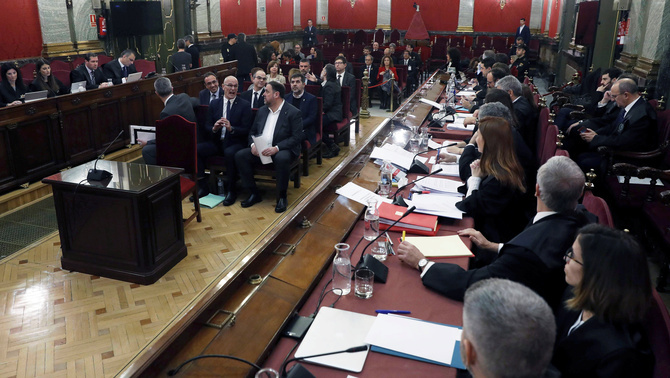 The first sitting of the Catalan independence trial gave the floor to the defence counsels of the 12 accused parties. Here is a selection of some of their most noteworthy statements:

Andreu Van Den Eynde (defence counsel of Oriol Junqueras and Raül Romeva) and the "exceptional" procedures of this case: "Self-determination is synonymous with peace, not with war. This case prevents the development of this ideology."

"Out of decency, the prosecution should clean up the case. Do not show us pot-banging protests. Do not show us thrown paper planes, or popular songs and chants. That would be an attempt against the right to protest." " Whenever a magistrate uses the first person plural, it is reasonable for the accused to doubt his neutrality or objectivity."

Jordi Pina on saviours of the nation:

" Act as judges, not as saviours of the homeland, as that is not what this trial is all about."

Jordi Pina on the witness testimony of Puigdemont:

"I understand the discomfort that the appearance of mister Puigdemont on a screen to make a witness testimony from Brussels may imply for these proceedings." "Peaceful mass demonstrations of citizens, some of which were tens of thousands strong, are deemed to be criminal. We find that this is incompatible with a state that proclaims to be a social and democratic state subject to the rule of law."

Benet Salellas on the "collective defeat":

"These criminal proceedings run contrary to the essence of a democratic state subject to the rule of law. This trial is a collective defeat of Spanish society." Olga Arderiu (defence counsel of Carme Forcadell) and the case split in two:

Mariano Bergés (defence counsel of Dolors Bassa) on the definition of rebellion:

"To pursue secession, even through illegal means, is not rebellion, as emerged from the parliamentary debate that approved the criminal offence of rebellion that is currently in force."