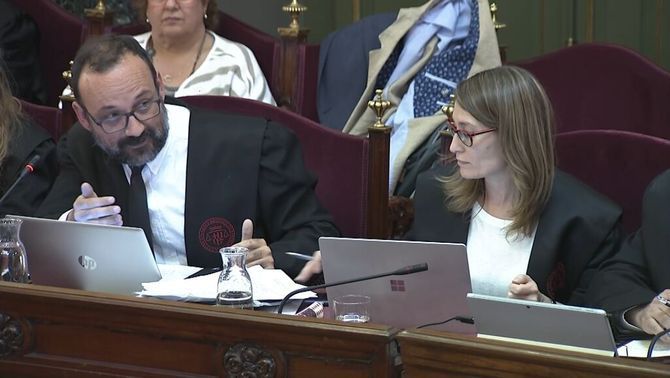 The Catalan independence trial has resumed this Wednesday afternoon with the request for the release of Jordi Cuixart by his defence counsel after a report by a committee of experts from the United Nations deemed the Preventive detention of Cuixart, Oriol Junqueras and Jordi Sànchez as "arbitrary", calling for their immediate release.

Benet Salellas was justifying the request of freedom of his client when Manuel Marchena reminded him that all requests of freedom should be articulated through separated pieces and that they must be done in writing.

"You are absolutely entitled to request it, but you know that any issues affecting the personal situation of defendants are to be articulated by separate pieces, in this case, due to the defendant's personal situation. I invite you to make all of these allegations in writing and, if you wish, as quickly as possible, This document will be submitted to the public prosecutor's office and to the rest of the parties, then the court will resolve it". The Working Group against Arbitrary Detention, the name of this group of experts from the UN, calls in a report for the immediate release of Junqueras, Sànchez and Cuixart because it considers that their fundamental rights are being violated. They also demand the State to compensate all of them, while calling for an independent investigation to be opened.

The document, which is not binding, contains very strong affirmations: it considers that they have been accused in order to coerce them for their independence ideas and to prevent them from continuing to seek independence through political means. But it goes further: accuses the judiciary and the Spanish government of having "agreed" to "decapitate" the independence movement.

The arguments of the defense Defence counsel Benet Salellas already advanced that before the end of the trial session he would request the freedom of Jordi Cuixart. And it was indeed said and done.

In the petition, the defence counsel argues that the UN Working Group found his client to be "incriminated for the exercise of fundamental rights", while being kept in preventive detention "in a context of criminalization", which, he adds, causes "a particularly damaging double violation".

The writing also stresses that, despite not being binding, the Supreme Court would have to address the report for "the appearance of good law" and notes that "it is difficult to sustain any indications of a comitted crime at this point " when a committee of the United Nations United states that "the very facts that are the basis of the indictments are, at the same time, an expression of the exercise of fundamental rights."

October 1 baton charges are finally displayed in the Supreme Court