100 years in prison for the 1-O government, the speaker of the Parliament and the presidents of Òmnium and ANC
The Supreme Court presided by Manuel Marchena has found them guilty of sedition and misuse of public funds 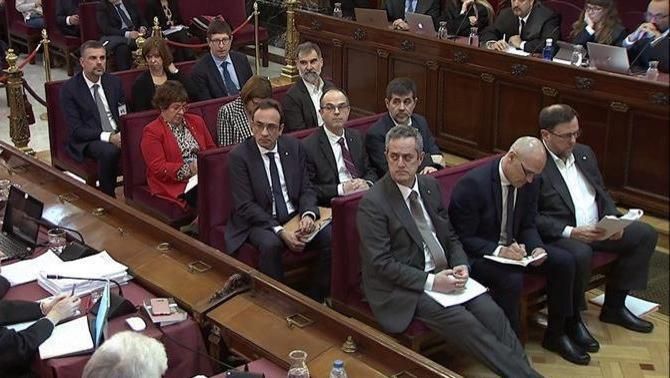 The seven magistrates headed by Manuel Marchena have condemned the 1-O government, the speaker of Parliament, the presidents of Omnium and ANC to sentences that range from 13 to 9 years in prison on charges of sedition and misuse of public funds.

They have done so in the sentence of the Catalan independence trial that was held from February to June in the Supreme Court and which took over three months to draft. Former vice-president and ERC leader Oriol Junqueras was sentenced to 13 years in prison and 13 years of disqualification from public office.

He is followed by former ministers Raül Romeva, Jordi Turull and Dolors Bassa, with sentences of 12 years in prison and 12 years of disqualification from public office.

All four have been found guilty of the crime of "sedition in conjunction" with "aggravated misuse of public funds through its amount".

Former ministers Joaquim Forn and Josep Rull were sentenced to 10 years and 6 months in prison and disqualification from public office for sedition. Unlike Junqueras and the other ministers, the Supreme Court did not find them guilty of misuse of public funds.

With regard to Òmnium president Jordi Cuixart and former ANC president Jordi Sànchez, they have been sentenced to 9 years in prison for sedition and disqualification from public office.

Shorter sentences for the former Ministers on bail

The other three former ministers, Carles Mundó, Meritxell Borràs and Santi Vila, who were not on remand, have been sentenced to shorter sentences for disobedience.

Specifically, they have been sentenced to special disqualification from public office for one year and eight months and to a 60,000 euro fine each. The seven magistrates in the Supreme Court who condemned pro-independence leaders, with Manuel Marchena in the centre

The facts deemed to be proven

In a 493-page sentence, the 7-magistrate court deems the proven facts to have begun on the day following the disconnection and referendum laws.

According to the court, there was a concerted strategy to create an appearance of legality and making citizens believe that the referendum signified the beginning of the creation of a Catalan republic.

According to the Court, the laws approved by Parliament established a division of roles between Parliament, the Catalan government and civil society, with the leaders of ANC and Òmnium playing a decisive role, as a means of political pressure.

A "symbolic and ineffective" declaration

It also deems it to be proven that the declaration of independence was "symbolic and ineffective". According to the magistrates, the declaration on 10 October 2017 was the culmination of a series of illegal actions by the accused  in the Catalan Parliament and government  that ran contrary to Constitutional Court injunctions.

It is also deemed to be proven that Parliament ignored the Constitutional Court as well as Parliamentary counsels.

With regard to 20 September, the sentence criticises the Mossos' operation before the Economy building: it states it was small and that the only reinforcements were mediation teams before 40,000 demonstrators.

It also states that the safety perimeter requested by the judiciary committee was not established, leading 7 Guardia Civil patrol cars to be subject to "significant destruction".

With regard to 1-O, the sentence states that the occupation of schools for entertainment purposes was a mere pretext for the voting centres to be occupied until early in the morning, thus making it harder for the police to clear them.

The State Attorney General asked for 25 years for Junqueras

Nearly a year ago, when the public hearing had already been called, the State Attorney General accused the nine leaders on remand of rebellion and asked for 25 years for Junqueras and 17 for Forcadell, Cuixart and Sànchez.

He asked for 16 years in prison for former ministers Forn, Turull, Romeva, Bassa and Rull for having executed a premeditated plan while being fully aware of the illegal nature of the Catalan independence process. Prosecutors Javier Zaragoza and Fidel Cadena, in a hearing of the Catalan independence trial in the Supreme Court

The State Attorney General's office based itself on the statements of Trapero and López to reinforce the charge of rebellion. It attributed them the leadership of a "generalised uprising interspersed with acts of force, aggression and violence" with different degrees of responsibility.

It asked for 7 years in prison and 16 months' disqualification for public office for former ministers Carles Mundó, Meritxell Borràs and Santi Vila for the crimes of misuse of public funds and "severe, prolonged disobedience".

The other members of the Catalan government charged with rebellion were also accused of misuse of public funds. These charges did not change throughout the public hearing and ultimately became definitive.

The Government Attorney's Office: from rebellion to sedition

On the other hand, the Government Attorney's Office charged the nine prisoners with sedition, requesting shorter sentences, the longest being 12 years for Oriol Junqueras.

It asked for 11 years and a half for the former ministers in his government, Forn, Turull, Romeva, Bassa and Rull, 10 for Forcadell and 8 for Cuixart and Sànchez.

It did not charge Borràs, Mundó and Vila with sedition, but rather with disobedience and misuse of public funds and asked for one year less: 7. The Government Attorney's Office rejected rebellion by arguing that there had been no violence, but it did state that the jailed members of the government had "induced, supported and directed" sedition.

Cuixart and Sànchez committed sedition because they were attributed responsibility for leading the social mobilisation as "a means to achieve the goals related to the breach of the law".

According to it, the former speaker of Parliament also committed sedition because she ignored "the multiple warnings" of the Constitutional Court and promoted the so-called "disconnection laws". During the previous phases of the investigation, the Government attorney's office also intended to press charges of rebellion, but the transition from the Rajoy government to the Sánchez government after the vote of no-confidence in May 2018 led it to be lowered to sedition.

Like the State Attorney General, the initial accusation did not change during the trial and became definitive.

The most severe charges as well as the longest requested sentences were requested by far-right party Vox, appearing under the legal figure of the popular prosecution.

It charged all former members of the government, headed by Junqueras, with the twin crimes of rebellion and criminal organisation, hence requesting 74 years in prison for each.

The far-right party only asked for less than the State Attorney General and Government Attorney's Office for Santi Vila: a fine for disobedience.

It is also the only case in which the initial accusation, which also asked for 24 years for Vila, was modified at the end of the public hearing. Vox secretary-general Javier Ortega and his colleague Pedro Fernández, giving a statement in a hearing of the Catalan independence trial

The arguments of Vox

Vox accused former members of the Catalan government with the promotion of a "binding" referendum which, according to them, implied "a clear attempt to subvert the current constitutional order".

According to them, their purpose was to "disintegrate the territorial unity of the State" and, to do so, they "violently unleashed the masses of separatist Catalan citizens" against Spanish institutions.

According to Vox, in this regard, the former speaker for Parliament played "a core role, from the first moments of the independence process."

With regard to the presidents of ANC and Òmnium, it accuses them of having promoted "an intense and violent citizen mobilisation" and to have "fed the myth of independence" with "xenophobic and racist arguments".

In their arguments throughout the trial, the defendants of the accused agreed that all of these severe accusations were not based on valid evidence.

They described the evidence put forward by the parties to the prosecution as "shrillness", "conjectures", "exaggerations" and "some lies". Andreu Van den Eynde, the attorney of Oriol Junqueras, next to Xavier Melero, the defence counsel of Joaquim Forn, giving a statement in a hearing of the Catalan independence trial

In this regard, they denied the legal validity of documents such as "Enfocats" or the famous Moleskine blackbook, as well as the so-called pro-independence "roadmap" from March 2017.

"The criminal law of the enemy"

Many of the defence counsels added that the charges were, in fact, based on the so-called "criminal law of the enemy", namely, not currently applicable criminal law, but rather that which is applied to those who are not deemed to be full-fledged citizens, but rather enemies to the interests of the State. Jordi Pina, the attorney of Jordi Sànchez, Jordi Turull and Josep Rull, giving a statement in a hearing of the Catalan independence trial in the Supreme Court

They also stated that the legal proceedings had begun long before 1-O, in a "general case" against the pro-independence movement in which they claim the State Attorney General and the Guardia Civil acted in concert.

According to this line of defence, the parties to the prosecution "had criminalised an ideology" and a political project, not specific facts that could be deemed to be crimes. Marina Roig, the attorney of Jordi Cuixart, giving a statement in the Catalan independence trial, between Benet Salellas and Olga Arderiu, the defence counsel of Carme Forcadell

Beyond 1-O itself, the main example of that was 20S, which the parties to the prosecution described as a rebellious "uprising" when they were only "protests and demonstrations".

The immense majority of the defence counsels also stated that their clients had not broken the law at any moment, and they also denied any misuse of public funds.

Jordi Turull: "I am here because I did not renounce my political activity"